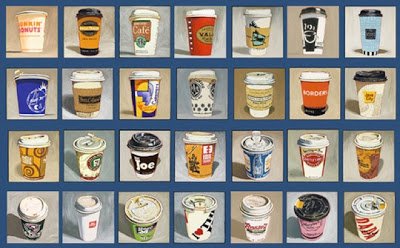 There are indeed at least 10 Starbucks in Paris now, according to Google Maps.  And I can bear witness that they are busy and popular.  One opened recent about a block from the hotel where Vivienne works, and it’s raised a whole new series of grievances among the hotel staff.

(1)  For the first time that anybody can remember, beverages being spilled in the lobby of the hotel are a daily occurrence.  Spilling large cold beverages onto the check-in desk has turned out to be a particularly spectacular headache, damaging paperwork and imperiling computers and other electronics.  But don’t discount the drama inherent in tossing most of a quart of coffee (skim, with hazelnut syrup, please) across a large expanse of marble floor during the busiest time of day.

(2)  Beverages being spilled in the hotel rooms, which used to consist of the occasional dribble of wine or a soft drink, is now happening on a regular basis.  Drinks with milk in them are of special concern, because if they’re not cleaning quickly they can leave a very bad smell for days.  Most recent drama was when housekeeping found a spilled something IN THE BED hours after the guest had checked out.  Replacement mattress, anyone?

(3)  The truly thoughtless have begun to carry their take-out beverages INTO THE RESTAURANT of the hotel!  The wait staff is livid – they have to deal with the garbage, but don’t have the pleasure of actually selling something from their own establishment.  Happily, as this is France, it doesn’t diminish their compensation.  (if you do this in the US, you cut into the tip of your waiter when you don’t actually purchase your drink from their establishment – not nice when you’re talking about someone who earns a fraction of the minimum wage and relies on tips to survive).

Vivienne says it’s gotten to the point where they have AT LEAST one person on staff during most of the day who deals with nothing but spilled beverages.  This is, obviously, raising their costs of providing service, and will eventually trickle through into a (very slightly) more expensive hotel experience.  She says that it’s not just the fact that people walking around drinking (which used to NEVER happen) has become more common, but also that their drinks are so very large.

Sit down.  Drink your coffee.  Enjoy life.  Then go on about your day.