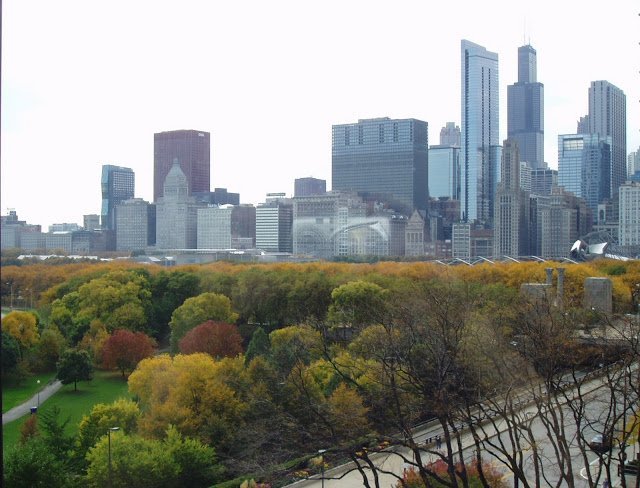 This is the view from where I’m sitting…

Even though I’m 47 days into my year-long shopping fast, I’m not unaware of stores, catalogs, and clothing websites.  If anything, since I’ve started blogging, and looking for perfect wardrobes for you, I see even MORE clothing than I ever saw before!  And while there’s a fair amount of dreck being marketed to women under the guise of clothing (or shoes – what STUPID shoes there are in this world), most of what I see is beautiful.  At every price point, there are stacks of lovely clothes available – far more clothing than any of us need, or should want.

So the mystery is this – WHAT HAPPENS TO ALL OF THIS CLOTHING?  Because I do NOT see that many women who look really well-dressed.  And as you can tell from the above photograph, any time I walk out of my building (well, out of my apartment, even) I see literally thousands of people.

I first observed this years ago when I was working in retail: the women who shopped on a daily basis (yes, we had customers who came into the store every day) and who bought the most clothing were NEVER the best dressed.  Ever.  They knew our markdown schedule, they could calculate (better than we could) exactly when a garment would go on sale, and to what percentage off, but they could NOT dress themselves well.  They wouldn’t take our advice, and most of the time they refused to pay full price for the items that were best-suited to them.

Conversely, we had a few customers who only came into the store 2 or 3 times a year.  But when they came in, they bought quite a bit – probably 5 or 6 garments, on average.  Everything went together, everything was compatible with what they already owned, everything fit perfectly (or was altered to a T), and they weren’t obsessed with the markdown status of what they bought.

I remember one woman in particular, who shopped twice a year: April and October.  She bought a HAUL each time – maybe 18 or 20 items.  But only twice a year.  And then she went on to do things more important than shop.  She is a terribly important local executive, and she always looks amazingly attractive.

There’s a lesson there…